Here we are again.

I’ve posted links to articles about social media’s inability to separate facts from “alternative facts” before, but this time it’s on a national stage that should really result in some action.

Or at the very least in a general understanding that these are not the places to go for news. Not just for calamities like the Las Vegas shooting, but ever.

The full story is scarier than you might think and deserves a read.

In addition to the link below, here is another article on the same topic from CNN: Bad Information After the Las Vegas Attack.

“It’s no longer good enough to shrug off … the problems in the system simply because it has computers in the decision loop.” 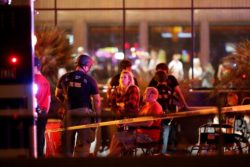 People at a medical staging area in Las Vegas