With neither Facebook or Twitter in attendance, a short-handed FEC attempted to do its job: cobbling together rules governing advertising.

The chair said it all. “I don’t think we’ve gotten very far.”

“The American social media platforms Russian entities used to influence the 2016 presidential election are essentially attempting to regulate themselves, fearing a repeat during the 2018 midterms.

“Meanwhile, the federal government agency tasked with protecting U.S. elections from foreign meddling struggled on Wednesday to even agree on narrow rules governing the size and format of certain disclaimers on digital political ads.” 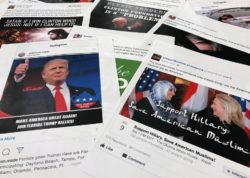